Leap - the magic it takes to break the rules and follow your dreams...

“Life is either a daring adventure or nothing at all.”

Risk.  Leap.  Jump into the abyss. 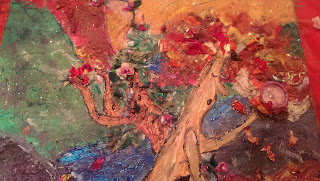 What does that mean to you?
One of my favorite quotes was said by Patrick Overton.  He said:

“When you walk to the edge of all the light you have and take that first step into the darkness of the unknown, you must believe that one of two things will happen. There will be something solid for you to stand upon or you will be taught to fly.”

I even made artwork about this quote - something really resonated with me. 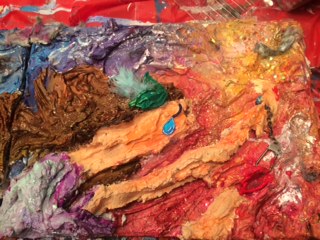 Are you willing to make that leap, take that risk and catapult yourself into the unknown, knowing that you will be given a solid landing or wings to fly? 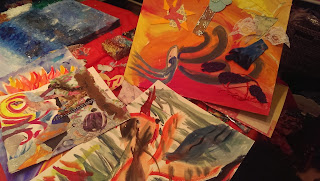 It is my honor to introduce a wonderful blogger Gretchen, who has written her own reflection on leaping, breaking rules, and following your dream.

Andi never seemed like someone who would jump. She usually wore a t-shirt and jeans, a diamond and a sweet smile.  We met as we suffering through music history class, and both wore cowboy boots. She was already married – I didn’t understand the concept.  Both of us just grasping at 20.
Maybe it was because I was really young, maybe I was too judgmental, maybe it was because I was just starting to cultivate a strange addiction to the tingle down my spine when I am happily proven wrong, but if you had told me that when we talk now, it would be via Facebook and she would be in Norway I would have told you to check your facts- I would have been sure you had the wrong person.
Andi’s husband expected her to shut up after college. Both he and even some of her family members thought that she had had her fun, and it was time to put that all away and stay home. I imagine the isolation creeping in like Russian cheat grass taking over the native brush on the Colorado plains around her.  Her dreams, her thoughts, her ideas, meant nothing, she was only as good as the warm spot she left in the bed.

Maybe this is what drove her to jump.

For graduation from Colorado state University, Andi took herself sky diving. Like an addict shooting up for the first time, she was hooked after that first fall. This wasn’t a needle or a band around her arm, a mirror and a razor blade, it was the sensation of the Boulder Flatirons coming in quick or the tug of ropes on the Shute, and the grins from the other jumpers around her as their feet came safely to the ground. Andi fell in love.

One jump turned into three, three turned into twelve and soon enough she found herself a certified sky diver. Her husband began trying to keep her from going, she ignored him and snuck out anyway. Like any divorce, there was more to it than a few leaps from an airplane, but I like to think that from up there Andi found her feathers, and saw that the horizon in front of her went far further than the backyard fence.
After the divorce Andi moved to Norway on a whim. She worked dumb jobs, learned the language and met someone new. She can even still describe the emerald sheen of the fjords as she plummeted toward them. Now, she has a good job, an apartment, a cat, a boyfriend who supports her and a stamped passport: Madrid, Belgium and even a few adventures back here in the American west.
Alexa on the other hand doesn’t have a cat, a parachute, a 9 to 5 or an apartment, she lives in RV. Her dog Beans rides shot gun. For me, she inspires the same sense of awe that Andi does. Alexa is an artist, she paints sea turtles, sharks, jellyfish, octopi and waves that seem so life-like, I can smell the salt and want to stretch my arms so that I can dive under the barrel in a hurry. She is also one of the hardest working and most ambitious people I have ever met.

Like Andi, Alexa found her muse had a wild side. Alexa is a surfer and her surfboard lives in the back of her RV with her canvases, clothes and paints. She lived on Maui for years and made sure that she hit the water whenever she could. Perhaps this is why you can feel each vibrant blue ripple and lather of foam in her brush strokes.

Because of this, her mentor urged her to pack up what she could and sell the rest, buy a ticket to the mainland and start doing art shows. Florida, Ohio, Oklahoma, Illinois, Indiana, Colorado, Alexa has parked her RV in these states and more and the collectors have come running.
As school children we all read the posters that told boys and girls to “try try again,” or stated that “We are doomed to fail what we do not try”. However, almost 50 years after Rosa Parks was arrested for not going to the back seat of the bus, almost 150 since the Wyoming territory gave us the right to vote and almost 300 since Abigail Adams urged her husband to “remember the ladies” many of the girls are still expected to sit down and shut up. Women like Alexa and Andi refused to listen.

When I think about my own choices, I think of these women. I know that there is no revolution without risk and women taking risk, are still revolutionary. I know that like many women, I have felt the pressure to “settle down”, have children before I am ready and stay close to my family. While I can’t paint and don’t plan on jumping out of planes, I hope that I too can leap because I too can see the boundless horizons as I fall.

Thanks Gretchen!  That definitely inspired me to get in touch with my wild side..maybe not skydive, but ay least try one new thing! 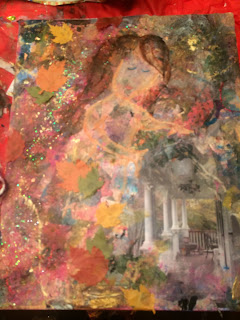 Have a wonderful day and let me know...what leap are YOU willing to make today? 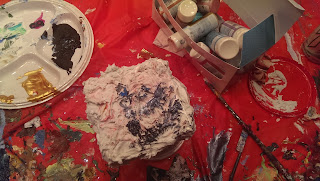 “A ship is always safe at the shore - but that is NOT what it is built for.”

Gretchen Comcowich is a Colorado Native, a part time Nantucketer and a Nonfiction MFA student at Columbia College Chicago. She also works as a publicist for several visual artists. Follower her on twitter: @lidamarketing Hawaii resident, Alexa Caskey, AKA Alexa Makin’ Waves Travels the country in an RV with her dog Beans selling her photo real paintings of waves, sea turtles and all things ocean. You can see her work on her website:http://alexasmakinwaves.com
Posted by Amy O at 10:37 PM