To create one’s world in any of the arts takes courage.” ~Georgia O’Keeffe
Let the countdown begin... 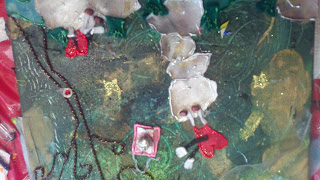 I've got a wedding coming up...and I think it's mine.  It's an interesting combination - I feel like I've waited my entire life for this, yet it also feels like this just popped up in front of me before my eyes.  Either way, ridiculously exciting!!!
In The Studio...
Everything's wedding themed this week.  I've been making my inchie art for table settings.  They've been such a hit when I made inchie pins out of them, that I am definitely going to be selling these on my Etsy Storefront Allspice And Acrylics!  So stay tuned :)
I even made them for my mother's spinning studio, Joyride!

More art...
Speaking of art, I've been trying to spread my art to a wider audience, hoping that the story behind why I create and how I discovered painting might inspire others.  I have started donating some of my work to hospitals, and hope to somehow use my art to advocate strength, empowerment, and hope to people who need it most, or who need it at all.
Since my greeting cards and posters of Fishing For Stars, Mommy Can't Fix This, and Singing Tree have been selling so well, I am still looking for the next three pieces to turn into cards and prints - browse through my gallery and let me know your thoughts!  We're all terrible at judging out own work, right?
Wedding Days...continuing a line of strong women...

I am thinking a lot about my grandmother and my mother as I'm going to final wedding dress fittings, ordering beautiful judaica glasses to be stepped on with a booming MAZEL TOV, and deciding what my "something old" will be.

I was so happy this morning when I saw my writing about my grandmother, my wedding and miracles be published by Indie Chicks.
This one's for family - in honor of my grandmother, for my fiance, and for anyone that has found who the real "miracles" are in their lives. Thank you Indie Chicks.

There have been many miracles over the years…taking a sip of water for the first time after three years of not being able to eat or drink, a coma and 27 grueling circumstances is certainly a significant one. When I was 18 – a week before my high school senior prom – I randomly found myself in intense pain. I woke up six months later, only to learn that my stomach had literally burst to the top of the OR and exploded, and after both my lungs collapsed and 122 units of blood, I almost died. Here I was, suddenly displaced from my former life as a carefree, audacious, musical-theatre-loving teen, and thrust into a world of tubes, bags, beeping machines, and a world of crisis where everything became minute to minute – a fight from physical, emotional andspiritual survival.

I could talk about how every night I prayed to God while tied down to a stiff ICU hospital bed that one day I would be able to just suck on a ice cube again. Or pacing through the aisles of a grocery store in tears wondering if I’d ever be able to have dinner with friends. How on my 21st birthday after a 19-hour surgery and three shifts of nurses and doctors, I finally took my first bite of food. How my three older brothers and devoted parents camped out in the ICU and stayed by my side through every up and down, and one was even inspired to go to med school and become a doctor from my ordeal. How despite my bleak circumstances, I was determined to never feel like a victimizedpatient, and while I was only sustained on IV nutrition, I taught nursery school, put up three professional art shows, starred in musicals, learned karate and yoga, and eventually wrote, directed and starred in a one-woman musical about my life. I could talk about how miraculous it was that I was able to maintain my sanity when I was once again living at home but prohibited from eating or drinking indefinitely – where even turning on the faucet could be a lethal temptation for me.

I could write about how I fell into my coma the week after I had gotten all of my college acceptance letters, and I mourned the loss of what seemed to be a natural progression of my maturation and education. How would I finally come into my own, become an adult, be part of a community and learn how to operate in the real world? Was I forever to be the sick patient, chained to machine, going from doctor to doctor – would I ever be normal again? Was this my life now? Once I said “yes,” it became my life – a beautiful, miraculous blessing. And at 27, I am finally in college feeding my brain with knowledge and my belly with campus grub.

My Grandmother, My Hero

But I’d just like to write about my Grandma. She is my miracle. My grandmother was in Auschwitz at 18 – a survivor like me in a way. The Nazis forced her to sew their uniforms because she was an amazing seamstress, which is how she was able to stay alive, along with her determined spirit and unwavering faith. Growing up, her and I would take nature walks, she would sew buttons on my coat, make her delicious noodle kugel, yell at me for not wearing socks on the cold tile, and although she never liked to discuss the pain of what she went through, I could always see that depth in her eyes. My grandmother always filled our house with joy, gratitude, love and food. She always exclaimed that she “was going to dance at my wedding,” which would be her biggest pride and joy.

My grandmother passed away while I was in a coma and it pained me deeply that I would never see her again. My mother and I often searched for her spirit in the many seagulls that flew around our tiny house by the water. We would pray to any seagull we saw, feeling my grandmother’s presence in their glorious flight. The seagulls helped us believe in miracles, that things would get better, and that my grandmother was still with us, watching over us all in loving protection. It made us feel less afraid of what the uncertain future would bring us at a time when it was hard to keep believing in anything.

Years later in November 2012, I had to have another surgery. What was supposed to be minimally invasive turned into three emergency surgeries within a week, and a few more months stuck in the hospital unable to eat or drink. When finally discharged, I wasdiscouraged and depressed. I felt lonely, like I had lost all connection to the outside world once again. With a gaping wound that has not healed to this day, all my physical strength depleted, and no road map for recovery, I was too tired to be the feisty and fearless warrior that had enabled me to not only to survive, but to thrive.

(That's a little teaser for ya...you can read the rest of the article HERE - thanks again Indie Chicks!)

‎”There is a voice inside of you
That whispers all day long,
‘I feel this is right for me,
I know that this is wrong.’
No teacher, preacher, parent, friend
Or wise man can decide
What’s right for you–just listen to
The voice that speaks inside.”  ~Shel Silverstein
Posted by Amy O at 9:44 AM