When in doubt, make a fool of yourself. There’s a thin line between being brilliantly creative and acting like the biggest idiot on earth” ~Cynthia Heimel

Hope everyone had an amazing father's day and a great weekend!

Discover, Inspire, Create #14 - the newsletter from amyoes.com came out this weekend.  Be sure to check it out HERE, and go to amyoes.com to sign up for next week's! 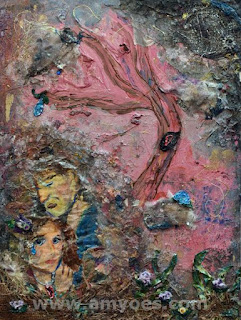 There's been so much going on, that I'm trying to find some time to ground myself before my wedding in...five days.

But I had a wonderful weekend, and hope you did too!

I got to take another peek at my art in the Discovery Museum...

I went to see my big brother Matt Oestreicher's concert "It's Your Time To Shine" at the Bijou Theatre, and at the last minute, he asked if I'd sing a little bit - so after inhaling an entire pizza pie at my seat, I sang "The Story" by Brandi Carlile - one of my favorite - it's in my one-woman show, too :)

You can watch it here:  Me Singing The Story
(Brandi does a pretty amazing job herself though :)  HERE)

Warning: I've finally hopped on the Twitter bandwagon.  Sorry - it's quite addictive.  YOU can follow me at @amyoes, which I guess would be www.twitter.com/amyoes

Sammiches, online dating...marriage...and writing about it :)

All this planning and thinking ahead has got me thinking back a bit too.  I'm so happy that
Sammiches & Psych Meds published my article on my crazy journey to marriage! When I first started telling people I was thinking of online dating, of course the first thing out of everyone’s mouth was their horror story experience from the daunting realm of the world wide web. If they hadn’t experience the online disaster themselves, it was their friend, their sister, or a reality show. Some guy ended up being the complete opposite of what he said, the date was the most awkward experience, the date committed this atrocious dating taboo – the stories were endless and each one felt more intimidating then the other.

I was very innocent going into the world of online dating – this was the first time I had ever tried something like this. But that was the least of my inexperience. I never had a boyfriend before. I’d never even been on a casual date before. At 25 years old, I may have been a bit naïve in my romantic experience…but my life experience certainly made up for it.
As a teen, I never made time for dating because I never felt like I had time for it. I was a busy-body with her hands on a million projects at once, and was more excited about auditioning for the latest musical than flirting with the guy whose locker was closest to mine. I knew I’d have the rest of my life to date, find love and eventually settle down.
However, this took a sudden hiatus when at 18 – a week before my senior prom – I fell into a coma. What followed over the next several years were more than two dozen surgeries, and an odd mixture of feeling like an old soul, wise beyond my years with too much life experience, and a newborn child rediscovering the world again, regaining physical strength and suddenly having to be taken care of again.

There were so many highs and lows along this deviant path, so many twists and turns, blessings and curses, setbacks and triumphs. The biggest one of all was just three years ago. I was recovering from what was supposed to be my final surgery, but unfortunately, it left be worse off. I was slowly healing, but my heart was what needed the most mending. From years of trying to keep my head up while being so isolated, I was overwhelmed with loneliness all at once. I was fresh out of the hospital and didn’t have a community of people my age I could just go out with at night and be social with – no way to leave this medical thundercloud behind me, even just for a few hours of relaxation. I had no expectations and nothing to lose…so I set up an online dating profile for myself using the first dating site I remember someone mentioning. What was the worst that could happen?

Well...you'll just have to read the rest of the article here...
http://www.sammichespsychmeds.com/online-dating-following-major-medical-complications/

Before I go...
Off To The Hospital!

I'm actually off to Columbia Presybterian Hospital right now - but don't worry!  I'm actually singing for the kids!  My brother and I are going to put on a concert for the children there - a nice collection of Disney songs and such. 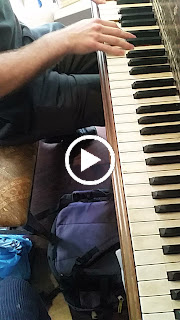 I remember being wheeled into the lobby to hear the concerts for months and months, and it is just the most amazing, miraculous, wonderfully rewarding feeling that hopefully I can spread some joy to the kids there, kids I feel are still a part of me to this day.  Expect a video up some time this week!

“Not everyone is capable of madness; and of those lucky enough to be capable, not many have the courage for it.” ~August Strindberg